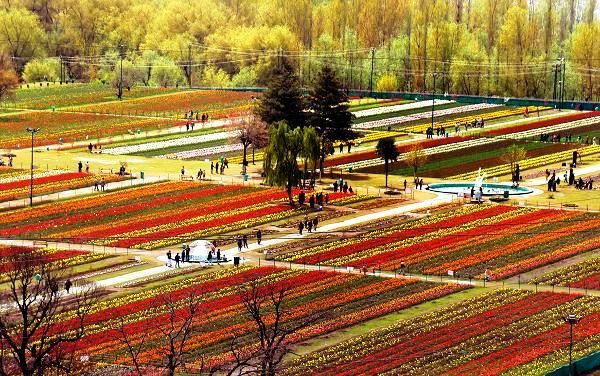 Srinagar: Department of Floriculture will likely throw open Tulip Garden in the last week of March for the public this season.

Deputy Director Floriculture department Nazir Ahmad Reshi said that Governor Satyapal Malik for the may likely throw open the garden in the last week of March.

“By the end of this month, around 10% tulips will have bloomed. We will throw it open for public who are eagerly waiting to visit the garden.”

He said around 12 lakhs tulips of 51 varieties have been planted in the garden which will bloom for over a month this season.

Various other gardens a also being beautified to attract the tourist arrival here.

Spread over an area of about 15 hectares, the garden is situated on the foothills of Zabarwan range near Dal Lake.

Reshi said, “The department has imported around 40,000 Hyacinth tulip bulbs this season which will mesmerize every visitor.”

“Hyacinths, Narcissus and Daffodil flowers have also been planted in the garden to add variety,” he said.

He said they department will organise 10-day Tulip festival in April to attract more travellers.

“There will be cultural programmes, photography competitions and other activities for the visitors to enjoy their trip to the garden,” he said.

Last year the department had also added water channels to add attraction to the garden.

“This time we doubled the area of the water channel so that people will enjoy it,” he said.

Some of the open spaces at vintage point have been earmarked for the visitors where they can sit to have a birds eye view of the garden.

Tulip Garden was conceived, conceptualized and created by Former Chief Minister of Jammu and Kashmir, Ghulam Nabi Azad, in his government in the year 2006-2007, with the aim to boost and promote floriculture in Kashmir Valley.

World Tulip Summit Society declared it the second best tulip garden in the world in 2014.
Originally known as Siraj Bagh, Srinagars Tulip Garden has been described as a florimarvel by cultivators as the tulips spread a rainbow of red, orange, purple, white, pink, parrot and yellow colors on the precincts when in full bloom.

Australian travel planner says she is trying to dispel

Bollywood crews will make major come back to Kashmir valley: Celebs in Gulmarg